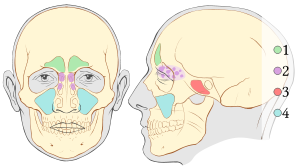 The sinuses are part of the same system as the nose. When a sinus or the nose becomes inflamed, it produces the condition called rhinosinusitis.